the fire behind myself

I never met Robin Blaser, although I have had fairly frequent correspondence with him, at least since 1993 when I included several of his poems in my From the Other Side of the Century: A New American Poetry 1960-1990 anthology.

In 1996 I invited him to send a poem for my Poets' Calendar for the Millennium, which, because of financial difficulties, never came to be. But we corresponded about the poem he had sent, "Pentimento." Later, I intended, so reveals my correspondence with him, to publish that poem in my "celebration of Sun & Moon classics," 50. The galley I sent him contained a couple of typos, one of them, we both agreed, a charming one—"moonbum" instead of "moonburn," to which he responded "That's a good one! even on Sunday!" Oddly, the poem never appeared in the final book; I have no idea what happened except to explain it as a work I simply forgot to include.

With the closing of Coach House Press, which had published his great collection of poetry, The Holy Forest, I offered to take over the distribution or reprint it in Sun & Moon Press. He reported that he would get back to me after his return from England in November of 1996, but I believe he never did. The University of California Press published a revised and expanded edition of that also in 2006.

More recently, I had been in touch with him in 2006 for the newest Gertrude Stein Awards volume, but this time our communications were through his friend Meredith Quatermain, since his condition was described as frail.

The death on May 7, 2009 of American-Canadian poet Robin Blaser sent me to my office shelf where I keep books waiting to be read. For three years Blaser's collected essays had burned its presence into my eyes, but only now, six months after his death, have I actually found the time to read this important book.

Beginning with his famous manifesto-like essay, "The Fire," Blaser argues that the business of poetry and poetics is creating a cosmology. He means that, as he explained in 2009 interview with Paul Nelson, not so much in a "religious" sense—although he himself admits to the influence of his Catholic childhood—but in a larger system of a world view. When asked for the specific components of the cosmology that he and his friends Robert Duncan and Jack Spicer attempted to create, Blaser answers in that 2009 interview (published in Golden Handcuffs Review):

The main components are, first, that there isn't one. That was what you felt and this was what the 20th century tried to do to us. It took us away and Marxism didn't help at all unfortunately with that problem. Marxism is quite a different thing, but that's when we're already social and know how to move and then Marxism can speak to you. Otherwise, you're fucked. You've not got a cosmos with which: Where's God? Well you're sure not going to...even an old Catholic like me isn't going to turn into THAT. And Spicer, I mean, Spicer's view of the Catholic Church [laughing heartily] IS ONE KICK IN THE ASS AFTER ANOTHER! HA! and I just loved it. And Duncan, ooooh Duncan. He was an occultist in some part and the occult tradition was a fascinating one. We all came to know of it. But the occult was a counter Christian, counter religious tradition that was also a religious tradition, whatever a religion means, essentially to be tied to a world at large. So all of us were busy working around it, sometimes at quite a loss. ....It was simply a matter of finding language as the way with which you could walk on a piece of earth....

In short, as Nelson suggests, for Blaser the search for a cosmology, an entire system of being, was a process rather than an end. As opposed to a lyric self-expression, Blaser approached poetry as a serial-like search—what in other essays he describes a revelation of the "real"—that in its intensity metaphorically "burns up" the poet, leaving a fire behind him.

This "process," he argues, moreover, can only occur in a community, and most particularly in a community of poets. Attacks against "coterie" ignore the reality that poets band together because:

Such communities tend to build a structure for men who wish to keep, hold and record the passionate relation with the outside that the world, the nation, need. This is the only place where such talk goes on.

Discourse, accordingly, is at the center of Blaser's poetics, even in this early essay, and most of the works in this volume resound with voices, often contrary voices that express a kind of explosion of ideas surrounding the subject at hand. 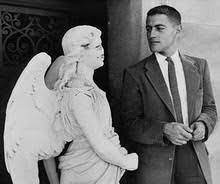 This kind of dialectical commentary can often seem an onerous task for the uninitiated reader; Blaser's essays are filled with references not only to his poet friends, Duncan, Spicer, Olson and others but to philosophers and contemporary thinkers, from Hannah Arendt, Walter Benjamin, Jacques Lacan, Alfred North Whitehead, Giorgio Agamben, Maurice Merleau-Ponty to all of Greek and Roman mythology along with writers such as Homer, Hesiod, Ovid, and Dante. Fortunately, Blaser's commentary is accompanied by an Introduction and highly informative Afterword by Miriam Nichols who expertly takes the reader by the hand through the dense thickets of Blaser's poetics.

If nothing else, what any reader comes to realize early on in Blaser's work is that his writing, both the poetry itself and the criticism, is not a historical recounting of the "other," but an immersion in both the thinking process and in the lives of the writers on whom he focuses, all creating a kind of Memory Theater, "a box with tiers, where the initiate would take the place of the stage and look out on the tiers, which in an ordinary theater would hold the audience—here there are images upon images, so that a man could hold the whole world in view."

Such an impossible undertaking, made even more difficult by the impact of differing demands upon the poet's attention, particularly the call for social and political involvement that claim little role in the poetic imagination, itself might truly "burn up" the poet. One by one, Blaser takes up some of those issues, in "The Particles" the role of the political, for example, in which he dismisses various views of what political poetry might be before going on to argue that it is the passionate particularity of poetry, its never-ending search for truth or "reality" and the commitment of the poet to this search that demonstrates most clearly poetry's relationship with the polis as opposed to statements about political positions which merely reiterate frozen thoughts, dead images of the society at large.

Blaser cites the wonderful example of the Spanish writer, Miguel de Unamuno, Rector of the University of Salamanca. After a rabid speech by General Millan Astray, "thin, emaciated, one eye and one arm," in which he called for the extermination of all who stood against Franco, Unamuno rose and gave a speech beginning:

All of you are hanging on my words. You all know me, and are aware that I am unable to remain silent. I have not learnt to do so in seventy-three years of my life. and I do not wish to learn it any more. At times, to be silent is to lie. For silence can be interpreted as acquiescence. I could not survive a divorce between my conscience and my world, always well-mated partners."

Describing the General as a "symbol of death," Unamuno closes: "Unfortunately there are all too many cripples in Spain now. And soon, there will be even more of them, if God does not come to our aid. It pains me to think that General Millan Astray should dictate the patter of mass-psychology. ...You will win, but you will not convince. You will win, because you possess more than enough brute force, but you will not convince, because to convince means to persuade. And in order to persuade you need what you lack—reason and right in the struggle." 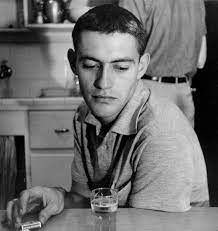 The crowd might have killed the Rector right there had not a Professor of Law taken Unamuno by one arm and Madame Franco by the other and quietly left the dais. Unamuno remained a prisoner in his house, Blaser tells us, until his death at the end of that year.

For Blaser it is the persuasion, through particularities, the "particles" of reality, that matter and are at the heart of any truthful political act.

That argument continues in "The Stadium of the Mirror," in which Blaser explores the relationship of poetry to the public in terms of aesthetics and psychology rather than the political. Here Blaser argues against the imaginary stage of poetry which the child mistakes as an "image of psychic wholeness," and argues instead for another version of the Memory Theater in which the mirrored stadium incorporates "as much of otherness as the poet can see and hear," internalizing, in short, a great part of the world inside of the poet's self. 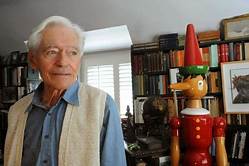 Robin Blaser
Blaser's vision of the poet and his roles, accordingly, demand enormous undertakings, a knowledge of history, literature, language, politics, and much else that transforms the poet's role into a near Herculean act. It is, obviously, something that might indeed burn the poet up, actually destroy the living man. And in his beautiful testament to his beloved poet-friend Jack Spicer, we see precisely this self-immolation. Although the story has been told many times, it is worth repeating.

One of two Spicer essays in this book, "The Practice of Outside," describes some of Spicer's methods, the creation of the serial poem beginning with not having any idea where one is going. Spicer, as Blaser claims, used a simple language that resembled his own way of speaking so to be able to live in that language and, as he wrote in his book, Language, to "have the ground cut from under us." Blaser argues:

Just here, poetry may become a necessary function of the real, not something added to it.

This living through poetry came, however, at a "remarkable cost." As Spicer once declared: "Neither baseball nor poetry are for amusement." Spicer's life, filled with contrariness and complexity, along with a deep dependence on alcohol, demanded a price.

At the end of this long essay, Blaser returns to a scene in which he had previously left us, at Spicer's beside in the San Francisco General Hospital, where he is soon to die.

I have already said his speech was a garble. He could manage a name once in a while. Otherwise there were long-runs of nonsense sounds. No words, no sentences. That afternoon, there was something like a dozen friends around his bed, when it became clear that he wished to say something to me. By some magic I can't explain, everyone left to let it be between us. It was odd because I didn't ask them to leave and Jack couldn't be understood. their affection simply accounted for something inexplicable. Jack struggled to tie his speech to words. I leaned over and asked him to repeat a word at a time. I would, I said discover the pattern. Suddenly, he wrenched his body up from the pillow and said,

My vocabulary did this to me. Your love will let you go on.

The strain was so great that he shat into the plastic bag they'd wrapped him in. He blushed and I saw the shock on his face. That funny apology he always made for his body.

Along with Blaser's observations in short and long essays on Olson, Louis Dudek, George Bowering, Mary Butts, the artist Jess and others, The Fire encapsulates the immense demands he puts upon the role of poet, a figure, like Joan of Arc destined to be burned up in the glory of his or her faith.