the woman who showed up to a party in black

by Douglas Messerli
Hannah Gadsby (writer and performer) Douglas / 2020
Yesterday I watched, with great joy and out-loud laughing, Hannah Gadsby’s second U.S. comedic special, Douglas. It may not quite be at the same level of her self-deprecating previous Netflix release, Nanette; and even she jokes that had she known how popular the first US work had been—in Australia and elsewhere she’s done eight other comedic presentations—she might have not packaged all her suffering, mostly from homophobic oppression, into one work, but perhaps stretched it out into a duo or trio. But Douglas is still a superb work. And the reviewer for The Guardian argues, this work “blazes with well-earned confidence,…that hitches up her crusading, patriarchy-bashing humor to great jokes, meticulous set-building—and a new cause.
That new cause, connected with the fact that in 2015 Gadsby was diagnosed in high-functioning autism, links up to her wonderful crusade against anti-vaccination advocates. 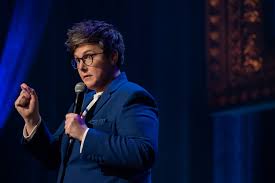 This new work reveals all from start as the comedian outlines to her audience precisely what she will be doing, almost a music and theater programme, even revealing her autism in that “introduction.”
Obviously, this is a longstanding comic device since when the “show” actually begins she can surprise her audience all over again with the clever way in which interweaves their expectations with the actual jokes, asides, stories, and, in this case, incorporating pictures of Renaissance art.
The pot-au-feu that Gadsby creates—in which from moment to moment she spins from short tales to one-liners, lectures, personal revelations, and a direct mocking of her audiences, made palatable in this case because of her own self-deprecation, and even hate-baiting (early on she warns her audience not to take the bait)—had made some, particularly males, to truly hate her kind of comic performances, or least raised a great deal of confusion among her critics.
Yet that mix of the high, low, comic, and serious commentary, all delivered with a truly knowledgeable and intelligent wit, is precisely what those of us who love her work so enjoy her performance and, I’d argue, even her persona. Without being disparaging, I’d suggest that Gadsby is like a bigger-than-life aunt who helps to educate us, make us laugh, and scold us when we need it, while letting us know that she truly loves us—the kind of aunt we’d all love to have (I did).
Indeed, her guide to her program, warning us of the possible pitfalls along way, is a kind of act of love. I’m going to make fun of Americans at first she tells us, but don’t take it seriously. Mostly that opening “act” deals with the ridiculous differences between the Aussie language and words Americans use: “petrol,” a liquid for example in Australia as opposed to our “gas,” something that not liquid at all; while a “fanny” in the US is the bum, in Australia it means the lower front of woman, so that as a child when she read an American book about children riding down hill on their “fannies,” she simply could not comprehend the act! Yet she loves the Southern pronoun “Y’ll” since its sexuality is neutral.
This leads directly into one of her best stories. While walking her dog Douglas in the park, a man approaches her suggesting that a smile needs less energy than a frown, she claiming that her face was simply in neutral. His dog incidentally, a whippet, has unwanted shoes of his four paws.
The man then asks her dog’s name to which she responds Doug. The stranger laughs, finally insisting that it was great name, to which the now self-admitted somewhat argumentative Gadsby disagrees, suggesting it’s a terrible name. I’ll leave out some of the details, and of course, the comedians telling of this story is truly what makes it funny. But it ends up with a lie, that she named her dog after the Pouch of Douglas, a small empty and unreachable space in women between the anal cavity and the vagina, named after the discoverer of this emptiness by Scottish man midwife Dr. James Douglas, which leads into her critique that only men name everything. 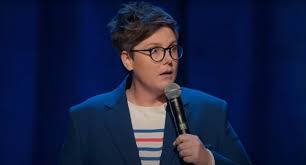 These themes are picked up again and again through Gadsby’s work, as she describes her own unfortunate visit to a male doctor, the consequences of autism most represented in the feelings of outsiderness, and a hilarious story about her grade-school teacher’s attempt to teach prepositions by describing someone inside, outside, or beside a box. Part of the great joy of Douglas is how Gadsby interlinks elements these stories, riffs, jokes, and art to her social and political views. Her work, in a sense, comes out of a long tradition of women monologists from Joyce Grenfell to Anna Russell (who, incidentally, died in Australia).

But even if Gadsby belongs in this tradition, her art is all her own, a contemporary and original talent that you can watch over and over (I did, laughing almost as heartily as I did the first time).
Los Angeles, June 5, 2020
Reprinted from World Cinema Review (June 2020).
at May 14, 2022