Artists and writers have long suggested that there is sometimes little difference between wrestling and loving embracement (think of American painter Thomas  Eakins’ The Wrestlers) or even between intense male struggles and making love (made so apparent in several of Robert Longo’s 1960s and 1970s performances). As a young man, even I recall the kind of thrill I sometimes felt when the pugnacious classmate and fellow worker, Eddie Poppe, used to grab me and threaten to punch—although I was also terrified of him and he would be horrified, I am sure, to know of my feelings at the time. Or maybe he did know, and, like the young figure at the center of André Téchiné’s new film, Being 17, threatened me because he was afraid of any sexual desires he might have felt.

Téchiné, along with his co-writer, Céline Sciamma, has created in his new film one of the most intelligent deconstructions of teenage battles between hormones and angst. This work, moreover, also subtly speaks about class differences (an issue also with me and my high school torturer) and racial separation that lies just beneath the surface of hate and love.

Oddly, however, in this film shows no one who truly hates. The bi-racial Thomas (Corentin Fila) lives in the French Pyrenees with a loving and caring farm family, who have adopted him, unable to have children of their own. If living in the isolation of mountain life, his days are filled with hard work as he grooms, feeds, and shepherds the farm’s cows, chickens and other animals, he is also in thrall of the beauty of his home, and made stronger in the process. His mother, ailing once more in early pregnancy, is determined that her intelligent boy should get a full education, and Thomas is excited about his dream of being a veterinarian, trudging each day hours through snow and a long bus ride to the school in the village below. In that village a woman doctor, Marianne (Sandrine Kiberlain) is dedicated to patients who often are unable to pay her, and whose beloved husband, Nathan   (Alexis Loret) is an army pilot posted to some unknown war, their deep mutual love limited to Skype communications. Their son, Damien (Kacey Motet Klein) seems to be a happy well-adjusted young man, doing well at school, particularly in math and science; he is also an excellent cook, helping his doting mother by making sure that each evening she eats well.

So what’s wrong with this picture? Why are both of these boys, of such socio-economic differences, seen as outsiders in their fairly well-to-do, mostly white  village. And why are both boy’s grades suddenly slipping, as they simultaneously begin to do regular battle in their school’s halls and yards? 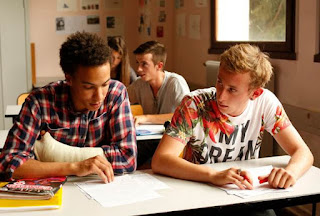 It starts simply enough, when the earring-wearing Damien solves a math problem in front of the class that has stymied Thomas. “I didn’t think you were that stupid,” he quietly hisses in a low voice to the farm boy. Soon after Thomas  retaliates by tripping up the slightly spoiled kid. By a few days later they are truly going after one another, breaking into schoolyard fights which students and teachers are forced to break up. Called to the school, Marianne tries to discover the cause, but when she perceives that the authorities are already determined to label Thomas as a bully, she attempts to speak up for him as opposed to simply supporting her son.

Just previously, she has been called to Thomas’ family’s farmhouse, his mother falling into a condition she has suffered each time she has become pregnant. But this time, with medicine and nursing care, the doctor is determined to help Thomas’ mother to bring her child to birth, despite the woman’s own fears, understandable since she has several times had the babies die in her womb.

Perceiving the difficulties of farm boy’s life, Marianne becomes determined that she will make it easier for him by inviting Thomas to come and live in their house, particularly since they have an empty room.

We now recognize what the boys’ violence has been all about. To relieve his own desires, Damien makes an on-line appointment with an older gay man, forcing Thomas to drive him to the destination. The man, also a farmer, immediately recognizes Damien—who asserts he is 19—to be underage, just as he has bragged on-line to be younger than he truly is. Rejected and now disinterested, Damien returns to the car, but Thomas, fascinated by the farm itself, follows the man, asking him questions about his farming management and, in the process, discovering what the thwarted meeting has been all about. Damien finally makes the issue clear: “I don’t know if I’m into guys or just you.”

The very painfulness of that remark has been lost, I’m afraid, on most critics, who almost to a man (Justin Chang of the Los Angeles Times, Stephen Holden of The New York Times and Peter DeBruge of Variety, to name just three) all imply that neither boy may actually be homosexual, but just experimenting with desire. It may be that they all, having truly liked Téchiné’s honest film, simply wanted to help it reach a wider audience than the standard gay filmgoers, and I admire their attempts. But the statement is a purposeful dodge for any young man fearing that he might be gay, a natural way of delimiting one’s own sexual confusions. Of course he is “into guys,” and one particular “guy” at the moment.

I would argue that, even at their early age of seventeen, there is little doubt that both boys, in fact, homosexual, are even though when Damien first attempts to kiss his new lover, Thomas momentarily accepts it only to lash out in another attack (the reason for his later apology, “Can’t you see I was just afraid.”)—the same series of events are played out in the British teenage coming-of-age film, Get Real—and Thomas, accordingly, is banned from attending further classes; he is permitted to take courses by correspondence.

Recognizing her mistake in bringing the boys together, particularly after investigating the bruises each other has inflicted upon their chests and backs, she insists that Thomas return home.

By film’s end, however, the two boys, after helping each other through two family dilemmas—the birth of Thomas’ sister and the death of Damien’s father— do find their way into bed and into delirious sex, first with Damien being fucked by Thomas and after, Thomas being fucked by Damien—an expression, surely, of their sexual equality and equal commitment in this relationship.

Even though having confessed his relationship to his mother, Damien is afraid, if they move to Lyon and she wishes to, that Thomas will not come to visit them, nonetheless the film’s last scenes, with its images of a local celebratory Fall bonfire and, following, what is apparently another sexual fling between the two boys on the mountain, we are assured that even if this love does not truly last, it was a serious thing, a first love that will never be forgotten by either of them.

In the end, as the two boys are assigned the topic of distinguishing between “desire and need,” we realize that Being 17 is not simply about a passing desire, but about getting over the childish fears that seventeen-year-olds naturally still embrace. Obviously, some people are slow to or never can grow up, being unable to embrace the adulthood that stands before them. But most of us “come through,” moving on to find the needs of our life and seeking to fulfill them.