This work, which over the years became almost a warhorse of both stage and cinema, in its first movie appearance is perhaps the very best. In most respects it is very like the 1930 sound version, as well it should given that the producer of this version, Al Christie, was the director of the talkie.

Despite very similar staging, however, this production’s auntie, Sir Fancourt Babberley, better known as “Babbs” (played by Charlie Chaplin’s brother, Syd Chaplin) is simply a more convincing aunt than is the later Charles Ruggles. And since the story is primarily a work of events, the various comings and goings of its cast, it truly works better in the silent version without all its often cumbersome dialogue that attempts to explain the impossible relationships between characters present and past.

Like all farces it is plot heavy, so instead of recounting the story scene by scene, I will just quickly summarize the basic elements of this 1925 rendition.

University roommates Charlie Wykeham (James Harrison) and Jack Chesney (David James) are in love with Amy Spettigue (Mary Akin) and Kitty Verdun (Priscilla Bonner) who are respectively the daughter and niece, wards of Stephen Spettigue (James E. Page). Unfortunately, although they have reason to believe the young women are attracted to them, they have been unable to get up the nerve to ask them to marry.

Meanwhile, Spettigue learns that once Miss Verdun is married he will no longer be the recipient of a stipend for her support and fearing that loss of income, he refuses to allow either his own daughter or his ward see the young men, planning instead to take them off to a summer vacation spot in Scotland where there are no young men in sight.

Charley gets word that his Brazilian aunt, Donna Lucia D' Alvadorez (Eulalie Jensen), a woman he has never before met, has traveled with a young lady, Ela Delahay (Ethel Shannon) to England and plans to stop by for a visit that very afternoon, perfect timing the young men realize, since she might play the required chaperon to a luncheon party to which they plan to invite their women friends and pop the question.

Meanwhile, their busybody college chum from another room, “Babbs,” trying to collect on a loan they’ve never paid back, attempts to rob them of the bottles of champagne they’ve set out for the event. He’s about to prepare for a new play in which performs in drag. Catching him in their room, they suggest that he also join them at the luncheon to help keep Charley’s aunt busy so that they might have time with the girls. But when, soon after, they get word that the aunt has missed her connection and has been delayed in her visit, and after seeing “Babbs” in his new female attire, they get the idea to have him replace the aunt so that the girls will have no qualms about a lunch alone with the two bachelor men.

As often happens in such farces, people regularly drop in to add to the complexity of the situation In this instance Jack’s father, Sir Francis (Phillips Smalley, who plays the same role in the later 1930 version) also suddenly shows up to visit his son, reporting that having done a thorough audit of his finances, he finds they are now debtors. Jack suggests he join them also at lunch and woo Charley’s aunt who is notoriously wealthy and a widow. Obviously when he discovers that she will replaced by their friend, it is too late, and he daren’t reveal the truth.

When the girls go missing from his home, the bothersome father and ward, Spettigue decides to butt into the celebrations. 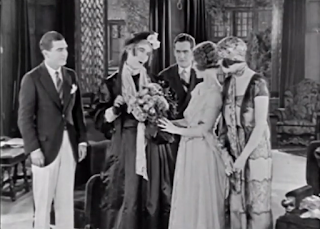 For the rest of the movie we are treated to “Babb’s” ridiculous attempts to imitate a Brazilian heiress, having utterly know knowledge about who she is and only knowing that she comes from Brazil, the land of the nuts. And nutty is the key word of his displeased attempts to keep in character, particularly when beyond all rationality, and with to the shock of his son, both Jack’s father and Spettigue fall head-over-heels in love with the aunt, dueling in their attempts to win her over.

What the 1925 version makes far clearer with its beginning scene is “Babbs’” previous experience with Ela Delahay and her father in France, where he attempts to help out the older man with his gambling obsession—he loses with his favorite number “13” time and again, finally going into bankruptcy—by bribing the croupier to allow her father to win. When a group of nasty American tourists foil that attempt, Babbs arranges that his beloved Ela’s father wins a raffle, thus allowing her enough money so that she can join Charley’s real aunt in her tour of England.

Inevitably, Thomas’ farce brings in, at the very last moment, the lovely and sophisticated real aunt and her companion, Babb’s lost love, Ela, who immediately realizing the absurdity of the young men’s fibs, play along without revealing their true identities. But not before the rejected Sir Francis recognizes Donna Lucia as a woman he loved from long ago in the past, thus hooking him up with both lost love and the money he needs to continue in his life. 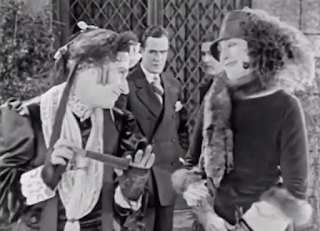 So too do the boys find the courage to ask their girls to marry them and are quickly accepted. Babbs recognizes Ela, although she, like all the others, cannot recognize him, and when he finally reveals himself, she accepts his love only after a great deal of dismay and doubt. Certainly one might wonder about a beau dressed up as a woman at the very edge of marrying an old man, a situation that reminds one most particularly of Jack Lemmon’s Daphne’s last scenes with Joe E. Brown’s Osgood Fielding III in Some Like It Hot.

The only one who winds up without a match is the foolish Spettigue, whose loneliness and  poverty, the writer suggests, is his reward for his cross-gender licentiousness and greed.

Not only does the lack of dialogue speed up the pace of this otherwise long and extracted series of mistaken identities and confused love, but the tradition of silent films speeding up the character’s movements rids us of the boring run-arounds that Babbs and Charley’s Aunt offers up to the old fool Spettigue. The accelerated speed not only saves us the slo-mo races in and out rooms but creates a true silliness for Babbs rooftop athletics which I found distracting in the 1930 version.

Even in 1925 when drag was still extremely popular—evidenced in the appearance of Julian Eltridge’s Madame Behave (also directed by Scott Sidney), Stan Laurel in The Sleuth, Frederick Kovert in Chasing the Chaser and Starvation Blues, and the various Zorro-like maskings and drag appearances in Dick Turpin—there was something notably old-fashioned in Charley’s Aunt’s “heterosexualized” vision of cross-dressing. While Eltridge, Kovet, and even to a certain degree Laurel who absolutely convincing in their female attire, Syd Chaplin never attempted to convince his audience that he truly was a woman. More like the early drag appearances of John Bunny, Charlie Chaplin, Wallace Beery, Oliver Hardy, Roscoe Arbuckle, Buster Keaton, Harold Langdon, and others, the point was not to disguise oneself but openly perform as if one pretending to be a woman; the humor existed in the fact that while the audience was totally aware the falsity of the situation, the film’s character’s mistook the male as a female. It was all in fun, not a true fetish or interest in becoming the opposite sex as it was with figures such as Eltridge, Kovert, and Bothwell Browne.

Already in that same year, moreover, works such as second part of Manfred Noa’s Helena, Louis J. Gasnier’s Parisian Love, Adrian Brunel’s Battling Bruisers: Some Boxing Buffonery, Terence Greenidge’s The Scarlet Woman: An Ecclesiastical Melodrama, Alfred Hitchcock’s The Pleasure Garden, Malcolm St. Clair’s A Woman of the World, Dallas M. Fitzgerald’s My Lady of Whims, and Roland West’s The Monster were beginning to explore the gay sensibility, early versions of camp, and even homosexual love in both Helena and Parisian Love.

By the 1930 production, as I note, drag as a comic device had begun to be passé of little deep directorial interest, even though it continues even until today, a fact that perhaps explains the odd lack of mention of this work in almost all of the major studies of gay cinema. Particulary in 1925 version, with its preface about Babb’s early relationship with Ela, Charley’s Aunt is more about willful trickery than it is about the relationship of gay men and the interest by some of them in cross-dressing.

INDEX OF ALL POSTS (alphabetical by title)   À tout prendre ( All Things Considered , aka Take It All ) Claude Jutra (screenwriter and dire...