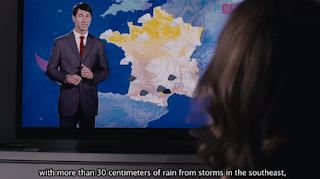 Soon after he stops by a fast-food stand to pick up some dinner, eating alone at a table. As he wanders away, the server follows him telling he’s left his keys. And so begins a remarkable night, as the two decide to get a drink. It begins with the server, Luca (Maxime Picot) speaking of a phenomenon they are about to experience, the magnetic waves from a black hole that occurred billions of years ago. But even here Léo seems uncomprehending and lost, hardly speaking as Luca tells the amazing story of the present suddenly being caught up in events from the beginning of the universe before the existence of the earth.

Luca suggests they go for a swim, further amazing Léo who can’t even seem to fathom where there might be a body of water in which to swim. Luca forces his friend to climb a wall, breaking into a private swimming pool of a home whose residents are evidently away.

Once more Léo seems confused by the events, hardly able to scale the wall, and worried about the weather, fearful of rain which according to Luca has not been forecast. 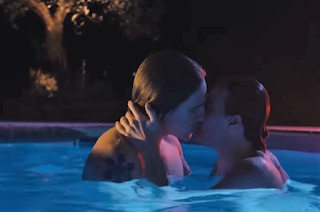 But suddenly in the pool the two come together and engage in an almost magical sexual tryst, kissing and holding on to one another as if destined to unite.

Back on the street, Luca seems cold despite a seemingly now reawakened and playful Léo, arguing that he has work early in the morning. Léo, however, suggests, “One last smoke?”

Luca takes out only a cigarette, but it might as well be an intoxicating drug given that suddenly Léo announces that he has lost his keys along the way, and now he doesn’t know where to sleep, it being far too late to call a blacksmith.

He asks if he might sleepover at Luca’s, but his new acquaintance says that it’s not at all possible. When Léo asks if he has a “man,” Luca replies, “No, a chick…and two kids.”

And suddenly Léo is hurt, angry. He recognizes it not as a “situation,” but suddenly a “problem,” even a lie as if Luca has suddenly altered his entire personality, having, as Léo he puts it “gone weird,” turning against him after their romantic swim.

Luca finally admits that he is homeless, that he sleeps at the restaurant. “I don’t have an apartment or anything.”

Suddenly Léo becomes the aggressive one, kissing Luca and racing off with Luca behind him.

He introduces Luca to a rooftop paradise, undressing him as the two engage in rooftop sex, sleeping together on the roof until almost dawn.

Léo awakens first and dresses, slowly kissing his friend awake. Luca suggests breakfast, but Léo, now the practical one, argues that he has to find a blacksmith and get into his apartment. But might Luca wish to sleep at his place this evening instead of the restaurant? Luca agrees that it would be a fine arrangement.

On the subway, we observe Léo sitting on the bench with a quiet smile upon his face, as if the previous ghost of a body he had inhabited has sprung back into life through the strange events of the night, which drew two unlikely forces together, possibly for an utterly new life. 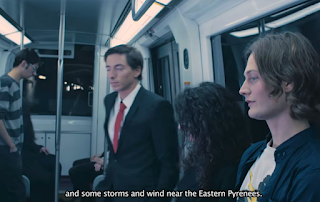 Near the doorway, we see the weather man, who observing the beautiful boy on the bench, attempts to maneuver his way closer to him. But this time, Léo does not even notice the former fantasy of his masturbatory urges. The magnetic storm has already swept over his world and changed it.

INDEX OF ALL POSTS (alphabetical by title)   À tout prendre ( All Things Considered , aka Take It All ) Claude Jutra (screenwriter and dire...